COVID-19 July Update
As we all take tentative steps towards a return to some level of ‘normality’ and the easing of lockdown restrictions this month, I think we are also aware that many aspects of our lives may never be quite the same again. Read more... 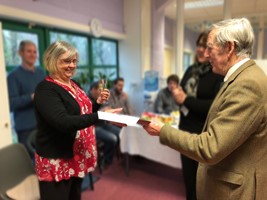 We are delighted to announce that Bill Lane is the new Patron of Charitable Giving.

Bill founded Charitable Giving in 1987 at his home in Peter Tavy, just outside Tavistock. As the company began to grow, he needed more space. So, in 2006, we moved to our present home in Pitts Cleave Industrial Estate. We are continuing to grow, and excited to see our portfolio of large corporate clients increase every year.

Bill’s contributions were celebrated when we held a retirement party for him in 2015. The office was decorated with bunting and balloons, and friends and family were in attendance. However, retirement didn’t go to plan. Bill’s devotion to Charitable Giving remained strong - he has continued to come into work regularly, remained on the Board of Trustees and more recently acted as Company Secretary too!

His new role as Patron reflects the esteem in which he is held by the Charitable Giving Board of Trustees, staff and other key players in the Payroll Giving world. As Patron Bill will represent Charitable Giving at sector events and attend social functions with staff. From time to time he may also be invited to share his considerable knowledge of all matters Payroll Giving as this increasingly popular method of fundraising evolves within the Charity Sector.

Good Luck Bill - we all wish you well in your new role and feel sure we will still be seeing you on a regular basis!

With New Year just around the corner and the end …

We are delighted to announce the Charitable …

Last month, we emailed over 1000 charities to ask …